You didn't think I was going to entitle a post, "Eat Cake" and then not follow up with some cake, did ya? This is a German Fruit Tart, well, I don't know if it's technically "German" but they were very common when we lived in Germany near my husband's parents. German cakes are a wonder, I tell you. Nothing like the plain jane birthday cakes and frosting that are typical here. German cakes have creams and puddings and layers of real whipping cream, rum, sour cherries, and just about everything imaginable. At our wedding in Germany we had 50 different cakes! It's typical to start out the reception with Kaffetrinken, which is kind of like the Brittish tea, but with coffee. Then later is the dinner, followed by the big wedding cake (we had a handmade ice cream cake created my a Master Patisserie Chef -- I didn't want to compete with the earlier cakes -- in layers of flavors including chocolate, raspberry, kiwi, pomegranate, and vanilla all covered in marzipan. YUMMM!), and, as if that weren't enough, around midnight we brought out fruits and cheeses and of course, more wine. Weddings in Germany are definitely an ALL DAY affair.

But I've gotten sidetracked. Would you like a peek at the cake I made? 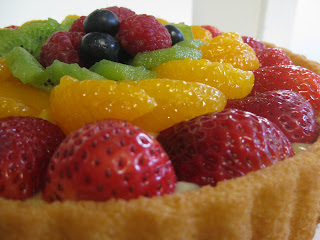 Unlike our wedding cakes, this one didn't take much time at all. There aren't many German cakes I can replicate here in the States because the ingredients aren't readily available, but our local Wegmans just happens to carry the "boden" or cake-portion of this dessert in their bakery aisle. It's the exact same cake boden (floor) that's available in Germany, right down to the packaging. I think one of the reasons this kind of cake is so popular in Germany is that the boden can be purchased pre-made, which saves all those desperate housewives a little time, especially since they typically make 2-3 cakes every weekend for Sunday Kaffetrinken.

Now, the main attraction of this cake is obviously the fruit, but if you put the fruit directly on the boden, it will get all soggy -- not good. German housefraus sprinke a layer of sahnestieff (what they put in whipping cream to make it extra stiff) over the boden -- this helps. Since I had none, I did something else I'd seen there, which is make up some vanilla pudding, let it firm up, then cover the boden with a thin layer.

All that's left to do then is to arrange your fruit, any sort you choose, in a circular pattern around the cake. I used strawberries, mandarins, kiwis, raspberries and blueberries. It ended up looking like this... 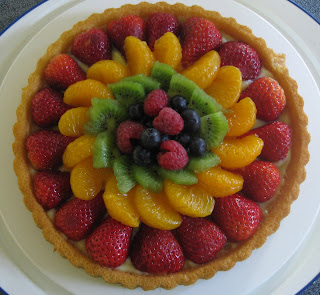 You could substitute any fruit you like. My mother-in-law also does a version of this for her strawberry shortcake. Simply omit the pudding, cover with strawberries, and add whipping cream over the top. There's lots of options here. I hope you'll try it out! Enjoy!
Posted by Christiana at 9:48 AM