Hey, everybody!
I just wanted to pop in real quick and share a card
I made last night, using my new Paper Smooches stamps.
Paper Smooches are designed by Kim Hughes,
and feature such cute and quirky designs. 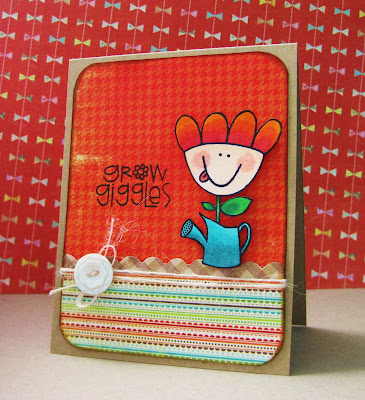 I colored him in with Copic markers,
pulling my colors from these papers by
My Mind's Eye Lime Twist collection.

Hope you enjoy it!

I've decided to announce my blog candy giveaway
on August first, so keep a look out!

Thanks so much for stopping by.
Have a great day!
Posted by Christiana at 5:05 PM 13 comments:

Hi, there!
Welcome to Lawnscaping Challenge #14! 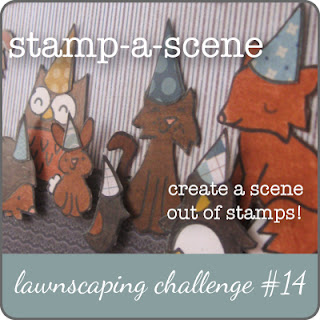 I was super excited about this challenge,
because creating scenes on card fronts is my
favorite thing to do with stamps!
In a way, it's like telling a story in pictures.
You create this little world and populate it with
characters, and I always feel like maybe
they come to life after I leave the room.
Wouldn't that be something?

Aside from the pure joy of
creating your own happy little scene,
the winner of this challenge will also
receive a fantastic prize: 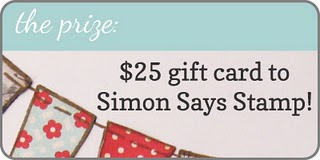 When I sat down and began to brainstorm
for my Design Team sample,
I knew I wanted to stretch myself and
come up with something I hadn't seen done
with Lawn Fawn stamps before.

But I was feeling tired, hot, and zapped of energy.

Looking through my Lawn Fawn stamp sets,
my eyes came to rest on the turtle from
On The Mend, but as you all know,
he has an ice pack on his back.
And then I thought,
"What if I gave him something else to carry?
What if he had a friend who was feeling how I'm feeling?
What if he carried him instead?"

One glance at My Silly Valentine
and I knew I had to do my own take on the
classic tale of the Tortoise and the Hare. 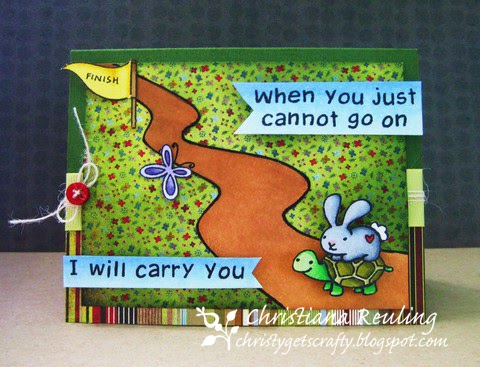 I hope it brought a smile to your face!
Please be sure to visit the rest of the Design Team
and check out their amazing samples:
Laurel Beard
Lynnette Kauffman
Ashley N. Newell
(who is taking a break this round due to health issues --
please keep Ashley in your thoughts and prayers)
Ayana Posadas
Christiana Reuling (me!)
Britta Swiderski
and our TWO amazing guest designers
Niki Estes
and Karen Baker

Leave them some comment love,
and then high-tail it over to the
Lawnscaping Challenge Blog for all the
details on how to enter.

We can't wait to see your creations!
Have a fabulous day!

Hey, everybody!
I just want to thank you all so much for your
sweet and supportive comments about my darling nephew
(who is thriving in the NICU, by the way)
and about my various recent health issues.
You all are so encouraging, and I'm grateful
to have such a great group of readers out there.

Inspired by you, I wanted to make a thank you card.
I broke out this adorable Lili of the Valley stamp
and went ultra girly on it, pulling my Copic marker colors
from these gorgeous papers by The Girl's Paperie. 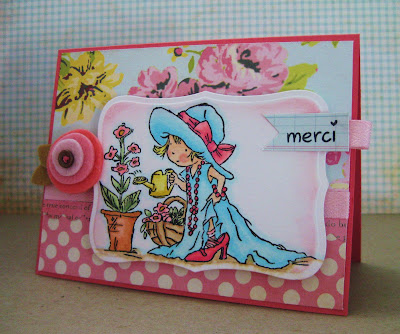 I dressed it up with a felt flower from Pebbles,
some pink twill ribbon, and a flag banner stamped
with a Lawn Fawn bonus stamp that you can get
by ordering from the company direct.

I colored in my background with Spun Sugar
Distress Ink by Ranger, holding the image in place
inside the Spellbinder's Nestabilities die
to give it that white halo effect around the edges.
I hope you like it!

I also wanted to let you know that I've got just about
everything now for my big 100 followers giveaway!
I'm waiting on a package that should hopefully come
early next week, and then I'll take the pics and make
the big announcement! So please stay tuned!

Thank you all so much for taking the time to
stop by today and brighten my day with your comments.
It's something I look forward to every time I post.
Have a wonderful day!
Posted by Christiana at 1:04 PM 7 comments:

Email ThisBlogThis!Share to TwitterShare to FacebookShare to Pinterest
Labels: Copics, Lili of the Valley

I have to apologize for being away
from the blog for so long.
It's been with good reason, I promise. :o)
First off, my nephew, Shane Murdock,
was born Saturday night around 11:10 PM,
six weeks and six days early.
It was an anxiety-ridden day, to be sure,
but it ended so beautifully, with this sweet little guy
making his way into the world. 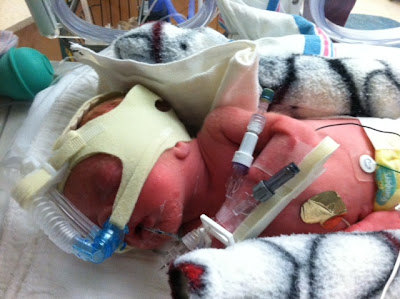 Shane weighs 4 lbs and 13 oz and will have to
remain in the NICU for four to six weeks,
but he's such a strong little guy, I just know he'll be fine.
He scored a 9 on his Apgar and is already breathing on his own.
I can't wait until the day we're allowed to hold him.
He's already stolen my heart.
So that's the good news.
I, myself, have been having some problems lately.
After a rash of doctor's appointments and tests,
I've been diagnosed with Polycystic Ovarian Syndrome,
(also known as PCOS) as well as Diabetes.
I have to have more tests done in the next two weeks
for elevated liver enzymes, and thanks to an abnormal pap smear
and I'm having a Colposcopy done next friday,
where they take sample tissue of my cervix for further testing.
It's been a rough couple of weeks, to be sure,
with my husband in the middle of mid terms,
and everything that's been going on with me.
As I'm sure you can imagine, worrying about your health
doesn't make for much positive creative energy.
On a much more encouraging note,
I saw that I passed 100 followers last weekend!
I'd been watching the numbers creep up,
getting super excited, but not wanting to say anything
because I really only want followers
who want to follow my work,
and not just for the sake of numbers.
But now that I've hit 100, I've got a big giveaway
planned that I will reveal in the next couple of days.
So please stay tuned for that.
Sorry there's no card today,
but I hope you understand.
I'm sure I'll be back in the swing of things in no time. :o)
Thanks for being there!
Posted by Christiana at 3:08 PM 10 comments:

Hey there!
Welcome to the Lawnscaping Challenge #13! I was really excited about this one because
it gave me an opportunity to really grow as a crafter,
since I typically don't do anything to the inside of my cards.
I'm definitely going to try to do this more often!
It really makes the whole card seem more finished.

And we have a new and exciting sponsor for this round,
Karen Burniston of Sizzix!
Karen is a well-known designer and paper crafter
who focuses primarily on designing pop-up and interactive
elements and is a licensed designer for Sizzix.

Please visit the Lawnscaping Challenge blog
for more information about Karen and the prize
(the die featured by the design team)
she has generously offered up.

For this challenge, we were given these great new
Sizzix pop-up die cuts to play with.
When I first received mine, I have to admit I was
really afraid they would be difficult to use.
But after watching this great video, I saw
that they couldn't be simpler!

And they just make a card so much fun!
Here's what I did with mine, using Lawn Fawn's
Critters on the Farm and Plus One stamps
and My Mind's Eye papers. 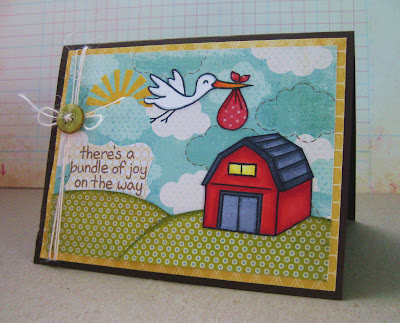 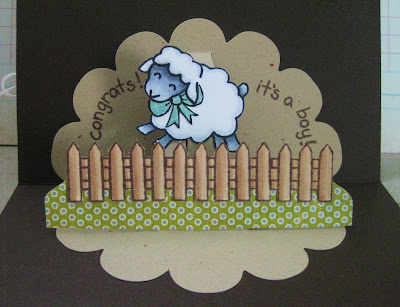 The other girls on the design team turned out
some amazing cards that you really have to see.
Laurel Beard
Lynnette Kauffmann
Ashley N. Newell
Ayana Posadas
Christiana Reuling (me!)
Britta Swiderski
and we are very lucky to have with us
the fabulously talented Niki Estes
for our July guest designer.

Thank you so much for stopping by!
And don't forget to head over to the
Lawnscaping Challenge blog
for all the details of how to play along.

I can't wait to see your creations!

Hello, there!
Welcome to my stop in the Young Crafters Unite blog hop!
I'm Christy, and at the ripe old age of 34,
I don't know if I necessarily qualify as "young."
But having only stumbled upon the wonderful world
of papercrafting about a year and a half ago,
I definitely consider myself a "young crafter" in terms of experience.
And besides, I think what we all love about papercrafting
is that it takes us back to memories of our childhood,
when we felt free to let our imagination loose on paper,
and took great pride and pleasure in doing so.
So in that sense, we're all "young crafters," aren't we?

The theme of this hop is "our favorite things,"
and while I have room in my heart for many
different types of crafting supplies, ;o)
I've tried to showcase a few extra-special ones here. 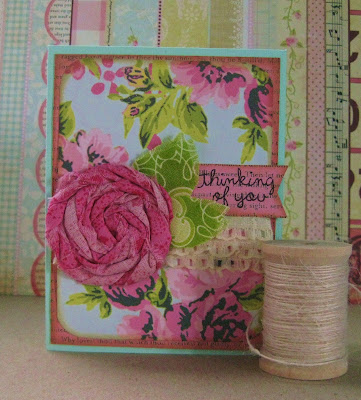 As a writer, I love, love, love text prints.
As a mom of three boys, also I love any excuse
to break out the girly patterns and colors,
like these gorgeous papers from The Girl's Paperie.
And I also threw in a new favorite item:
Cosmo Cricket's Glubers.

I used their 2" gluber with fabric scraps torn into strips
to create the floral embellishment you see here,
adding some hand-trimmed fabric leaves to the underside.
And no "favorite things" card could be complete
without a stamp from my favorite company: Lawn Fawn.
I stamped "thinking of you" from Sophie's Sentiments
in my favorite Jenni Bowlin Spice Tin ink.

And now it's time to continue the hop,
over to the AMAZINGLY talented Jill Foster's blog.
This lady is such an inspiration!
You'll see what I mean when you get there.

If, for any reason, you lose your way or need to
return back to the beginning of the hop, you can do so
by clicking the Young Crafters Unite blog hop link,
which will redirect you to the main page,
where you will find the complete list of participating blogs,
and also find out how you can win some great prizes.

I hope you've enjoyed your journey so far.
Thank you so much for stopping by!
Posted by Christiana at 12:01 AM 67 comments: