Hey everybody! How are you all this Monday afternoon? I am so excited to tell you guys about my recent trip to the Akron, OH area. Honestly, it was the best day I've had in a long, long time. Just perfect! It didn't quite start out perfect though. Last Monday, the day before we were set to go, I started getting really bad stomach cramps, and by afternoon I couldn't keep anything down. I stopped eating completely and tried to call in sick that night but one of my co-workers had beat me to it. We run the store on a very tight staff on Monday nights, and with one down already, I knew I had to go in. I made it through and woke up Tuesday still feeling iffy. Knowing that I wouldn't have the opportunity again (hubby had already taken off work and my visiting SIL was watching the kids) we decided to just go anyway. I'm so glad we did!

The first stop on our trip was Hollo's Papercraft in Brunswick, OH, and wow! If you are ever in the area, you MUST stop in. The inside is nothing to look at. Sort of like slightly run-down warehouse. But man, do they have paper galore! Cardstock in every size and color and texture imaginable. Ditto on the envelopes. And the prices for both can't be beat. The cardstock I bought was something around $1.89 per lb., and after I took enough to last me probably a year, it came to a whopping $2 and some change. Yes, that's right. A year's supply of cardstock for less than $3! The envelopes I picked out were 5 cents a piece, and I think I bought somewhere around 200 for $10. Patterned paper was no cheaper than anywhere else, but they had a TON of it, and I bought a ton. Really cute papers that I didn't see anywhere else on my trip. And look at that little grasshopper stamp! I just had to take him home with me. And you know what? By the time I left Hollo's my upset stomach had left too, and it didn't bother me again for the rest of the day! 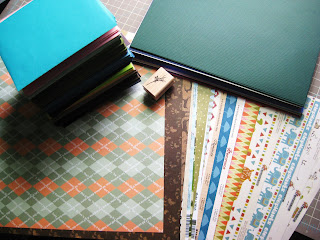 My next stop along the way was the Hobby Lobby in Medina, OH. I've been to a Hobby Lobby once before, and I absolutely love that store. My idea of heaven. And the best part? Stamps, stickers, and patterned paper were all 50% off! I was able to buy twice as much as I would have been. I think I was in there for somewhere around 3 hours. My loving, patient husband lasted about 20 minutes before he headed to the car with his book and told me to take as long as I liked. I think he even caught a nap while I was there!

I got two new clear stamp sets, including the mix and match sentiments set which I was so excited about! I don't have nearly enough sentiments and I loved that I could use one set to create so many. I also got that cute little train stamp that will be great for boy's birthday cards. I picked up tons of adorable patterned paper (are you getting a feel for my addiction?), adorable doodlebug stickers, three rolls of ribbon, a set of corderoy covered brads, some Colorbox fluid chalk ink (love!), and the Basic Grey rub on roller tool. Notice my lack of Copics. They weren't on sale, so I regretfully decided to pass on them this time around -- well, except for the colorless blender. I was in desperate need of one, since my old one dried out. I used my coupon for that. :o) 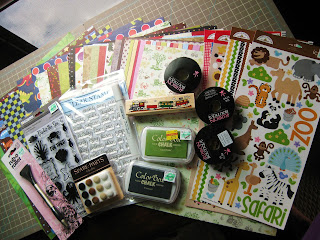 After that, we made our way to Fairlawn, OH, to the Archivers. And oh my gosh, that store is AMAZING! I think I spent another 3 hours in there. Just beautiful. I would have bought so much more if I'd had a chance to save up a little longer. Again, I bought more patterned paper, distress stickles, Hero Arts shadow ink in Soft Sand, a leaf stamp to create my own backgrounds for jungle-themed cards, a roll of ribbon, and the Fiskars small stamp press, which I was really excited about. The only thing I left behind that I really, really wanted there was the Hero Arts Friends definition stamp, which has been on my wishlist forever, but online retailers seem to always be out of it. But it had to be done. After I checked out, I was down to about $20 in cash and $15 in my bank account, and there was still one more stop to make. 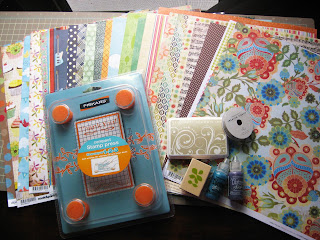 And that was Pat Catan's! Someone told me that Pat Catan's is like the Ollie's of craft stores, and that was pretty much right! Again, it wasn't much to look at, but wow did they have some great deals! I was walking around in there wishing I had budgeted better, but in hindsight, there wasn't a single thing that I regret buying, so I'm really glad about that. I picked up some great stamps from Stampendous, including the adorable Ellie the Elephant, a brave knight, and this great musical note background stamp which I LOVE and can't wait to use. They also had three sheets of EZ Mount, which I was thrilled about, since I have on my wish list some unmounted rubber stamps, and EZ Mount isn't that readily available. I bought two. And last, but not least, this sweet pumpkin paper, which my hubby actually bought for me since I was completely out of money at that point. He knows I have a thing for pumpkins. ;o) 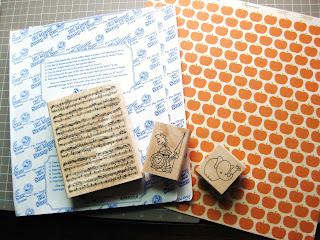 And that's it! I had saved up a total of $150 for the trip, and had $25 in my bank account, and by the time we returned I was down to zero cash and $6 in my bank account. That's a LOT of money for me to spend on craft supplies, but this truly was a once-in-a-lifetime opportunity for me and I don't regret a penny of what I spent. It was an amazingly wonderful day.

Hope you enjoyed journeying along with me! Come back tomorrow to see what I made with my new supplies! I'm off to work...
Posted by Christiana at 2:45 PM