Hello everybody! How are you this fine Monday? Eager for a fresh, new week to begin? I have a lot of plans for this week, as far as personal life goes. This afternoon I want to take my boys to see the movie, "How To Train Your Dragon." It's playing at the discount theatre, and Monday is their bargain day -- just 75 cents a ticket! They also have a Monday Movie Meal -- a box of popcorn and a small drink for $2.50, so even with snacks included, it's still extremely affordable. I'm hoping they'll sit through it. My kids must be the only kids in America who don't like going to the movies! I practically have to drag them there. Lol. But it's been a while since we've gone so I'm hoping they'll do better.

As far as other plans, I want to really start organizing my office/spare bedroom/craft area. My sister-in-law from Germany is coming to visit in four weeks and right now it is a disaster! I'm one of those people who needs to have a place for everything, but so far I have zero storage containers, so everything has no where to go but on every available surface. Well, that's changing. After hours and days of researching online, I finally ordered the Cropper Hopper hanging file caddy and folders, and I've picked up some desk organizers and I'm going to get everything squared away. It's going to be a job that extends into next week as well, since I don't expect the Cropper Hopper caddy to even arrive until then, but I'll try and take pictures when I'm all done and everything's got a home.

Well, on to today's project. This is actually a card I made in the wee hours of Saturday morning, for the son of a friend who's birthday party my boys attended this weekend (hubby had to take them, I had to work -- boo. There was even a bounce house!) Check it out. 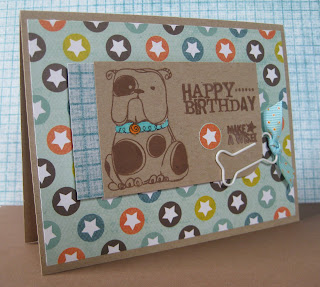 I started out with this bulldog image from Inkadinkado, which I stamped with Colorbox Chalk ink in Chestnut Roan in Kraft Bazzill cardstock. I also stamped him in black Memento ink so that I could color his collar with Copics. Then I cut that out and paper-pieced over top of the original for some dynamic color. I loved the Kraft paper so much (my first time using it, that I decided to use it for my card base as well, instead of the white I was intending on using. 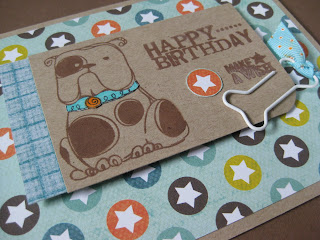 The patterned paper is from My Mind's Eye, called "Reach For The Stars," I believe. I stamped the sentiments from Studio G next to the bulldog on the Kraft paper and cut that out, rounding one corner. Then I added a little strip of the patterned paper's B side -- that blue grid -- just to break up the background a little. I cut out one star circle and adhered that next to the sentiment to reinforce the color scheme, then popped the whole thing off with dimentionals. 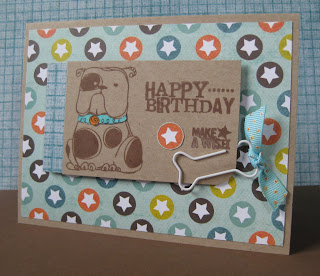 I thought I was done then, but I felt like it still needed something. I remembered that I had these little dog bone paperclips, so I added one, and tied a bit of blue polkadot ribbon around the corner. Not satisfied with the subtle shade, I decided to take an orange Copic to it and liven it up a bit. I was really pleased with how it turned out.

Well, I hope you all had a wonderful weekend! Thanks so much for stopping by. I love your visits. :o)
Posted by Christiana at 12:34 AM