First off, I want to wish a very happy birthday to my son Elliott! Elliott is turning seven today. He's a wonderful, bright, energetic child who loves playing firefighters, police, secret agents, and deep sea divers. Elliott admires his Uncle Jeremy very much and wants to go diving with him when he gets older. Since we've done the whole firefighter birthday a few times, Elliott decided to go with the deep sea theme this year. And as I do every year, I made his birthday cake. I'm certainly no professional, but I do enjoy trying my hand at it three times a year when my boys birthdays come around. Check out Elliott's ocean cake. 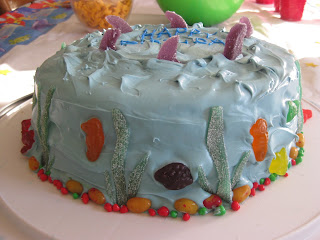 I made a two-layer yellow cake with cream cheese frosting tinted blue. I like everything on my cake to be edible, so I used sour apple strips trimmed to look like plants, peach jelly bellys and watermelon nerds candy for the rocks, and assorted sweedish fish for my sea life. 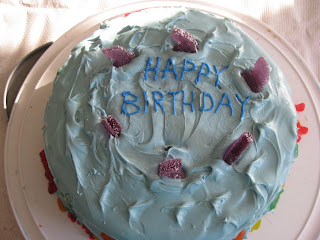 On the top, I wrote Happy Birthday and ringed it with some circling shark fins cut out from purple fruit slices. They had a blue rind (sort of looked like purple and blue half orange slices) which I trimmed off. 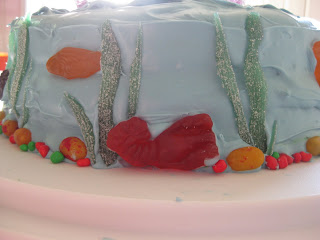 We even had a lobster, among other things, including starfish, sea horses, blow fish, and a wiggly, giggly octopus. 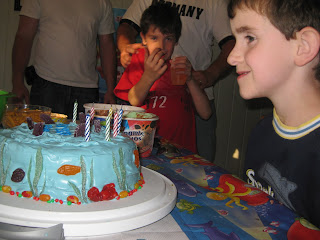 Elliott has been through so much in his short life, including being born with club feet, wearing casts, braces, and having lots of physical therepy, and eventually surgery at the Shriner's Hospital. He's doing so well now, and he's such a happy, lively, thoughtful boy, my heart warms over every time I look at his precious, freckled face. I love my boy! Happy Birthday, darling Elliott. Mama loves you so dearly.
Posted by Christiana at 1:09 AM