Happy Tuesday, everybody! Yesterday seemed almost like a mini holiday for me. It followed on the back of my son Elliott's seventh birthday party on Sunday evening, and my husband happened to have the day off, so he took the boys to the beach for the afternoon. I would have loved to join them, but I had to go to work later on and wouldn't have had time to shower, so I decided instead to do something I haven't done in a long time. I took myself to the movies.

There's a discount movie theatre behind the mall, which is about a minute and a half's drive from where I work, and "The Last Song" -- the movie based on the book by Nicholas Sparks was playing. I'd been wanting to see it but it just hadn't worked out to go with friends, and it just happened to be letting out a half an hour before my shift started, so it was kinda perfect. Only bad thing was, I cried all my eye makeup off and of course, didn't have any more with me! ;o) But oh well. It was a really good movie.

When I got to work, I still had a few minutes to kill after I'd changed, so I wandered around the store and remembered to look up the name of that "wood block" paper I was talking about in the previous post. It's called "On the Boardwalk" by Reminisce, and the B side is the shark paper I also mentioned and will share with you today.

My baby brother Jeremy turned 30 last month. Yes, 30! I can hardly believe it myself. It means that I'm getting old, folks. He's nearly four years my junior, so that gives you an approximation. ;o) Anyway, Jer has been crazy about sharks since he was very little, and now that he's a grown man, he's become a certified scuba diver and instructor, and he travels all over the world to swim with these frightening creatures. He jokes that he thinks that the most glorious death for him would be to be eaten by a shark. Preferrably a Great White. So when I saw this shark paper, I knew immediately what his card would be. 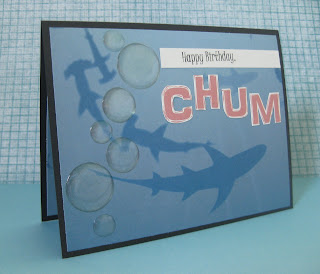 For anyone who is not aware, CHUM is the word referring to that bloody meat/guts mixture that is used to attract sharks for observation. Basically, it's shark bait. So, this was my sisterly way of teasing him over his whole "glorious death" spiel.

I kept the card simple and classic, with not too many frills. Black Bazzill cardstock was my base of choice, because it really made the shark paper pop and also added that "deep, dark, sea" element I was going for. I typed the word "CHUM" in some strange font I found on my computer and played around with the coloring until I got this fleshy peach/pink shade. Then I stamped "Happy Birthday" in black StazOn so that all the attention was on the CHUM. He's not a ribbon kinda guy and it didn't "go" anyway, so I decided to just add some bubble stickers that I found in our clearance bin at work. I don't remember who they were by, sorry. 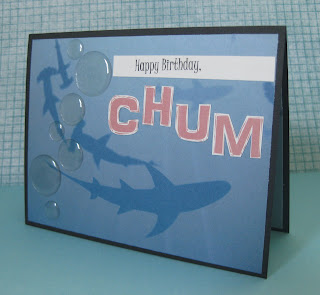 Anyway, he got a good kick out of it, and I hope you will too! Have a great day! And don't go near any shark-infested water! ;o)
Posted by Christiana at 11:45 AM