Ever have one of those days where everything you touch seems to turn out wrong? I am so having one of those days. After lunch, I spent about an hour looking through the digi stamps I've collected for inspiration. I finally settled on a sweet Pure Innocence girl that I bought on Etsy from the talented artist. I haven't used it yet, so I printed out three copies -- one to use today, and the other two to save for later. Well, I ended up using and tossing them all. I don't know if I was being heavy-handed or what, but the color kept bleeding through the lines and messing up the whole image. So an hour later, I abandoned card making and decided to dig through my bead box instead. I must have tried 30 different combinations of earrings and bracelets, and took all of them back apart because I wasn't happy with how they were turning out.

So long story short, I spent a total of THREE HOURS this afternoon trying to get crafty, and failing miserably. So this is me officially throwing in the towel. Instead, I'm sharing with you a pair of earrings I made last summer, using turquoise and freshwater pearls. I called them "Cowgirls." 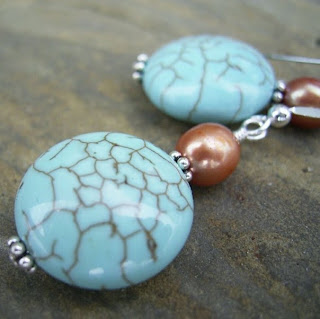 In other news, some friends of ours who served as missionaries with us in Cameroon, West Africa were in town this weekend and we were able to take them out to breakfast this morning. They are still serving on the mission field, so this is actually the first time we've seen them in almost EIGHT years! I can't believe that much time as passed. It was so nice to sit and chat over eggs and blueberry waffles and catch up on all that's transpired since then.

If you're a praying person, please send up a request for Hans and Donna that God would richly bless them in their ministry. So many lives are touched and changed because of them and the work they are doing in Africa, and I count an honor to know them and call them our friends.

Blessings to you all!
Posted by Christiana at 5:34 PM