Hmm. Well, I'm not really sure if my project for today "worked." I had two things in mind when I began: over at Kristina Werner's blog this week, she challenged everyone to make a simple, one-layer card. Since we're also celebrating Earth Day, I thought it would be the perfect opportunity to make a card that used a very limited amount of supplies that left no waste. And because Earth Day is all about "going green," I went with some tone-on-tone green ink and cardstock. 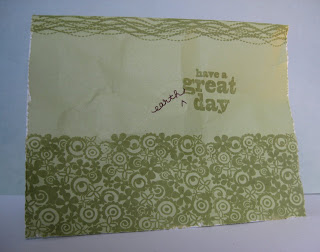 First, I stamped a square background stamp from Studio G in a repeating pattern across the bottom of the card, then added some squiggly stitch lines to the top. I used a sentiment from Inkadinkado, and added "earth" into it with a chocolate brown pen for a little variation on color.

But somehow it still looked so plain, so flat. So I tried crumpling it a little, to give it a recycled look. I'm not sure if I accomplished that or if it ended up looking like I just pulled it out of the trash. What do you think? I distressed the edges with the blade of my scissors to try to carry the idea further that it was rumpled on purpose. Again, I'm not really sure that it worked. 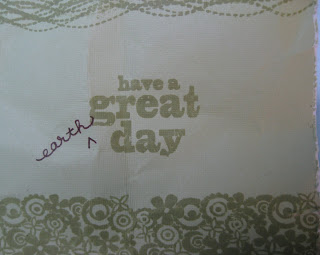 I did want to show you some new stamps I picked up at JoAnn's today though. I found them in the dollar bins, which I check regularly for little goodies like these. I normally only pick up one at a time, but most of these were the only one left, so I decided to go ahead and splurge this once on the whole set. The sentiment I used on my card was from one of these. Won't they be great for some summer cards? I love that most of them are perfect for coloring. Aren't the pelican and the seahorses fantastic? These are all from Inkadinkado. 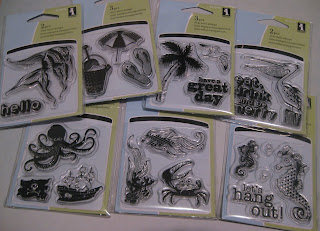