Wow, can you believe another week has gone by?
I was itching to get in my craft room all last week,
but it just didn't happen. Sigh.
Sometimes life is just like that.
But I made sure to get something cranked out today!
Check it out. 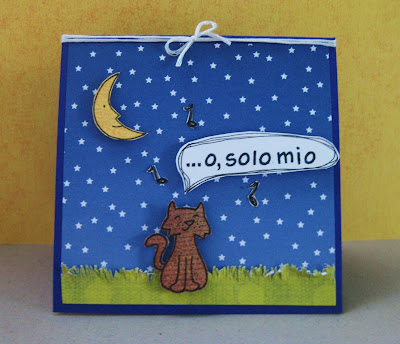 I've been wanting to use my Lawn Fawn "Critters in the 'Burbs"
again for a while. These little animals are soooo cute!
I had this idea for making a "Missing You" card
with a twist, featuring a singing cat at night, a la Garfield.
Only cuter.

I found this old Cosmo Cricket sheet of paper at work
that had been in the stockroom for who knows how long.
I've never seen or heard of the collection before.
It had this kind of tapestry print, which I thought would give the
cat's fur some interesting texture and color variation. 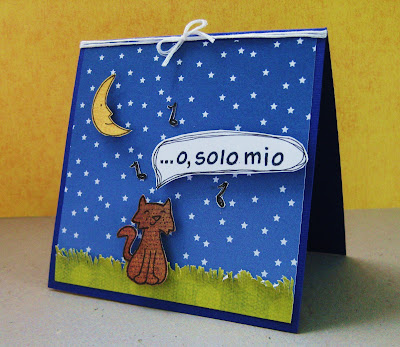 I folded a sheet of Midnight Blue Bazzill cardstock into a
4 1/4 x 4 1/4 square card, then covered it with starry sky paper
from Frances Meyer. I trimmed a green scrap from My Mind's Eye
into fringe for grass, then ruffled it up a bit to make it look
more natural.

I needed a moon, but Lawn Fawn doesn't have a moon stamp yet,
so I used one from Elzybells, a company that I only
recently discovered -- just before they closed their doors
for good. Sad, isnt' it?
Their images are so whimsical and quirky,
very much along similar lines as Lawn Fawn, which is why
I thought the two might work together here. 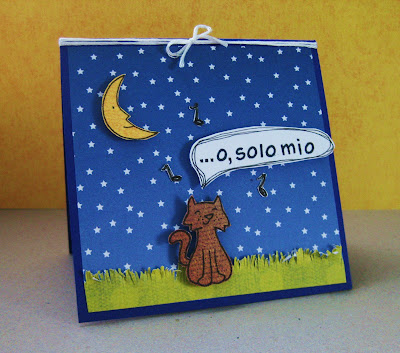 ﻿
To finish up I took out Harold's ABCs and spelled out
"O, Solo Mio" and drew a speach bubble around it.
I also drew three musical notes just to make it clear
that he's singing, and cut those out.

I adhered my cat, moon and sentiment with pop dots and
tied on a bit of white embroidery thread as a final touch.

I think he turned out pretty cute. :o)
Have a great night, all!
Posted by Christiana at 6:17 PM