Happy Monday, all! I have recently discovered a new love for Mondays, thanks to the very talented Kristina Werner and her MACM (Make A Card Monday) tutorials. If you haven't watched one of Kristina's videos, drop everything that you're doing and head over to her blog http://www.kwernerdesign.com/blog/ and then meet me back here so you can tell me how wonderful I am for sharing that link. You're very welcome. ;o)

Another reason I love this Monday in particular, is because I received a package in the mail today! Yay! About a week ago, I was reading through Paper Crafts magazine and I saw an add for a site called addictedtoscrapbooking.com, and even though I'm not a scrapper (yet) I decided to check it out. Turns out they sell all kinds of paper crafting supplies, and I spent a delightful couple hours (I was sick, so I had an excuse to lay around) scrolling through all 6,859 rubber stamps they have. (I'm dead serious. 6,859!) Well, my husband happened to walk by and saw my longing glances and the saliva dripping from my chin (okay, so I'm not serious about that part) and after I'd explained to him that it just happened to be the last day of a sale where you could take 40% off any one item and showed him the adorable stamp set which I could use in so many different ways, he very generously bought them for me. (Thank you, Pookie! You're the sweetest!) Today they arrived! Take a look. 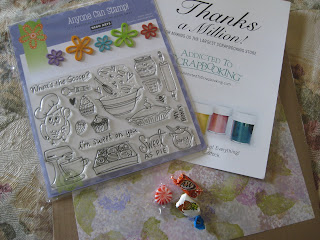 I thought it was very nice that they also sent me a pretty sheet of scrapbook paper and three pieces of candy. Okay, so it's cheap candy that I will probably just throw away, but that's beside the point. They've made their impression. I know that companies sometimes throw in freebies for people who make a $50 or $100 purchase, but I thought that was unusual for someone who spent less than $20 total including shipping.

Here's a closer look at the stamps. Aren't they cute? It's the "What's the Scoop?" collection from Hero Arts and they're even better in person. I love that they can be used in so many different combinations. My head's already swimming with ideas. 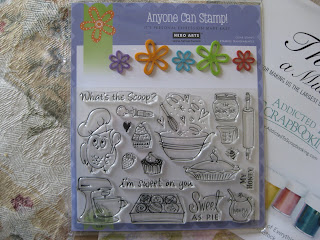 Well, as if that weren't enough to blog about, there's more. I decided to get crafty today by trying a new recipe. In the grocery store yesterday, I came across a can of green chile enchilada sauce that had a recipe on the label called Creamy Chicken and Chile Enchiladas. I decided to try it, with a few minor alterations. As the Pioneer Woman says (don't you just love her?), here's the cast of characters. 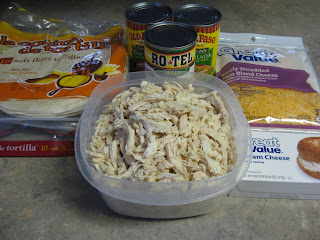 A pound or so of shredded chicken breast (I boiled and shredded 4), 2 cans of green chile enchilada sauce, 1 can of Rotel diced tomatoes and green chiles (that's my "few" alterations. recipe called for plain diced green chiles, but I thought the tomatoes would add a nice sweetness.), an 8 oz block of cream cheese, an 8 oz package of shredded cheese (I used a colby jack taco blend), and 12 or so tortillas, depending on how much you stuff them.
So, I started by draining and heating up the tomatoes and chiles in a large saucepan, cut the cream cheese into blocks and added that until it was melted and combined, then added my shredded chicken breast. That mixture I spooned onto each tortilla, and then wrapped them up by tucking in the short ends first, and then the long ends and putting them fold down in a greased 9x13" baking dish. My recipe made enough for 12 enchiladas and since I could only fit 6 in a baking dish, I ended up using 2. Over each pan of enchiladas I poured 1 can of the green chile enchilada sauce, and topped it off with half a bag of cheese (we like a lot of cheese). Bake in a preheated oven at 400 F for 20-30 minutes (mine took 30) or until the sauce is bubbly and the cheese is lightly browned. 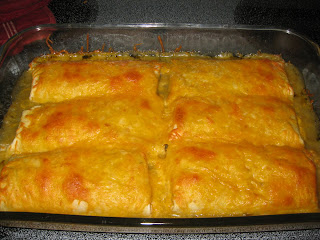 And here's how it came out. We are a family of 5, with three boys ages 8, 6, and 4. Each of them ate a half an enchilada, I ate 1 1/2 and my husband ate 2. So we ended up with one, plus an entire dish of 6 left over. Not bad if you don't mind eating them as leftovers later in the week. If you want to avoid this and think your family would eat a similar amount to mine, I'd recommend just cutting the recipe in half.
I also made a little salad by mixing up some diced tomatoes, a can of corn, a little ranch dressing and some salt and pepper in a bowl and it was a nice accompaniment. I would have liked to add a little something green to the plate for color, but I couldn't find anything suitable, so I just left it. Refried beans would also make a great side dish, but no one in my family will eat them except me, so it's rarely worth the trouble for me to make them. 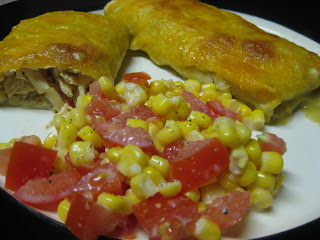 The finished result was pretty good! I'd give it 4 out of 5 stars. It was yummy, but the recipe could be improved upon. Next time I think I'll add a little taco seasoning in with the chicken mixture to give it a little extra kick. It was pleasantly spicy without being overly so. I wouldn't have minded a little more heat, but since I'm cooking for kids, I usually stick on the mild side. The chicken mixture looked a little dry, but it was actually pretty creamy. Still, next time I might not drain the dickens out of the tomatoes and chiles. A little extra moisture would not have been a bad thing. All in all, it was a decent recipe. One I'll definitely revisit again, but be sure to play around with some.

Posted by Christiana at 6:55 PM