Okay, so last Friday when I volunteered in my son Chaztin's second grade class, one of the stations that his teacher had set up was reading the childrens book "Yoko" by Rosemary Wells. It's the story is of a little Japanese girl (cat) who brings sushi to school for International Food Day, which no one wants to try. To coincide with that, she made Yaki Soba (Fried Noodles) and all the kids got to taste some.

Chaztin loved it so much that on the break from my station I went down and tried some myself and got the recipe. And the two of us decided to cook it tonight for the family.

Doesn't it look good? Because his teacher was making it for a bunch of students with different likes and dislikes, hers only contained noodles, edamame and egg. To make it more filling, and more suited to my family's tastes, I added a few other ingredients to the mix. You can copy mine or change it up however you want. It's a really easy recipe to play with. 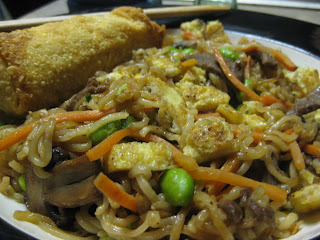 Open desired amount of ramen, set seasoning packets aside, and cover with boiling water for 3 minutes or according to the package directions. Drain well immediately. Toss with seasoning packets. Set aside.

In a wok or frying pan, add a little olive oil and saute mushrooms, set aside.
Scramble eggs with a tablespoon of water, pour into pan and cook on medium until set, carefully flip over, cook, remove, chop into slices, set aside.
Add meat to pan, cook until no longer pink, set aside.
Add a little more oil to pan, saute matchstick carrots and edamame, set aside.
(Btw, if you don't want to dirty up a bunch of dishes, just layer these in a large bowl (with the exception of the noodles.)
Add last bit of oil, fry noodles until they reach desired crisp-tender state.
Dump in cooked ingredients, toss to combine.
Thinly slice green onions and sprinkle over top.
Serve warm. 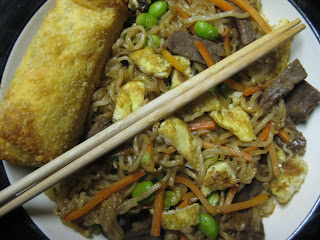 I added shrimp eggrolls as a side (Do they even have eggrolls in Japan? I don't know.) which I just bought frozen. They were yummy though! The whole meal was a big hit. Lots of great flavor, texture and color, and everybody cleaned their plates with no complaints.
I'd give it 5 stars, and I'll definitely be making this again.
Posted by Christiana at 8:08 PM