My middle son, Elliott, is six years old and dreams of one day becoming a firefighter. Every day he comes home from Kindergarten, eats a peanut butter and strawberry jelly sandwich with his little brother, then runs upstairs to change into his "fire gear." It does my heart good to see my boys engaged in pretend play. I just love to see little imaginations at work!

In the three years since Elliott discovered a love for firefighting, we've gone through at least half a dozen firefighter dress-up jackets. Those you find at the store are always cheaply made of thin cloth that easily rips and tears at the seams and never seem to last more than a couple months. One birthday he received one that actually split the first time he put it on!

I wanted to get him a new one for Christmas, but I couldn't find one anywhere that was good quality and reasonably priced. If I knew how to sew and owned a sewing machine, I could have made him one from scratch, I suppose, but since I don't, I did the next best thing. Check it out. 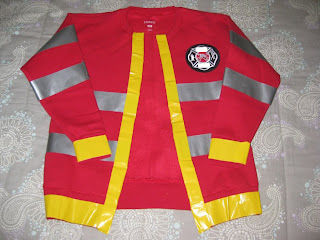 What I did was buy a regular Hanes sweatshirt at Walmart for $4.00, as well as a roll of yellow duct tape, since my husband already had silver on hand. I enlisted his help (I've explained my inabilities with straight lines previously) and we just cut the shirt front from bottom to top, applied the silver in strips to look like the reflectors on a safety jacket, and the yellow to give it some trim.

I wracked my brains and searched all over for something to make a badge out of. The cheap plastic ones never last more than a day or two before the clip on the back breaks off. The Monday before Christmas, I still had no ideas, so on my way up to the mall for some last-minute shopping, I pulled into a local firestation. I explained my situation to the kind firefighter who opened the door and told him about Elliott and his love for firefighting. He went to his locker and brought me back this authentic fire patch that area firefighters wear on their dress uniform sleeves. Perfection! Not only did Elliott get his badge, but we had a special story to share with him about how he came to have it. 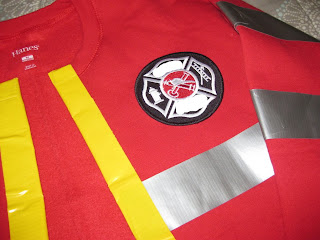 I glued the badge on with some fabric adhesive, piled on a few heavy books for a couple hours to make sure it was good and stuck, and that was it. Total cost was around $7, total time, maybe 10 minutes plus gluing time. You should have seen the look on his face when he opened up that box. Sheer joy. And doesn't he look adorable all dressed up in his gear? 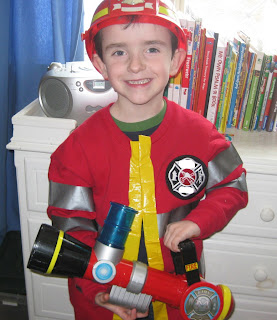 We did have to remove the yellow around the sleeve cuffs. We didn't realize that the material wouldn't be able to expand enough to fit his hands through with it on. But I think it looks fine without it. I was concerned about the duct tape losing it's stick and coming off, but so far it's held wonderfully. If it does, it's easy enough to pull off the old and put on some new from the leftover rolls. There's more than plenty. Did you make any gifts this Christmas?

Email ThisBlogThis!Share to TwitterShare to FacebookShare to Pinterest
Labels: crafts