Happy Wednesday, everybody! How are you all doing today? I'm sitting here watching the American Idol results show as I type this, eating a slice of pepperoni pizza with a glass of Arizona iced green tea (totally addicted to the stuff!), so I think that qualifies for multitasking! Lol. Seems I do that a lot these days -- life just keeps getting busier and busier. And that's how I like it, pretty much. At least that way it never gets boring. Although sometimes it's nice to have a little downtime. Especially if you want to get crafty! It's pretty hard to multitask when you're working on a project. Which is exactly what I did this afternoon. Check it out. 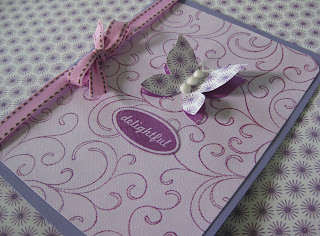 I was in a purple mood for some reason (obviously) so I went with an entirely purple theme. I used a darker cardstock base, and stamped a Hero Arts background stamp with plum ink on a pale lavender cardstock. I wanted to see if I could emboss it, so I did, using clear embossing powder. I don't know that it made much of a difference though.

I then stamped a butterfly from The Paper Studio in the plum ink on white cardstock, and again on the back of the patterned paper. I cut both out and glued them together only in the center. I tied the ribbon from American crafts so I could figure out where to center the butterfly, then folded up the top wing layer a little bit so that they popped up.

I stamped the sentiment from Fiskars on the lavender cardstock with the plum ink and cut that out. I had planned to pop it off, but decided it looked more like it was part of the pattern when it was flush with the card, so I attached it that way. And as a final touch, I added a few mini gitter dots to make the butterfly body and drew on the antenna with a white gel pen. I'm pretty happy with the way it turned out. 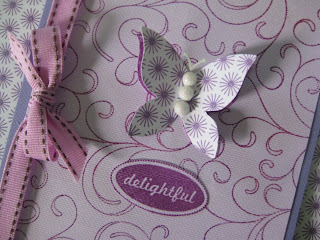 Also, I got a chance to run up to Joann's this afternoon and bought a yard of blue ribbon for $.99 and changed that first sympathy card. I think it looks so much better now. I'm a firm believer in putting your best foot forward, or giving it your best, or however you want to say it. What we put out into the world is a direct reflection of who we are, and I just didn't feel comfortable giving out a card that I knew was not the best that I could do. Now I can breathe a little easier when I bring it to my writers group. Whew, I'm so glad to see that Casey is safe for another week! Don't get me wrong girls, I'm a happily married woman, but he certainly is nice to look at. ;o) And his voice isn't bad either.

Off to watch the rest. See y'all tomorrow!
Posted by Christiana at 8:54 PM