A Trip To The Shriner's, Plus Blog Candy

Wow, can you believe that Monday has nearly drawn to a close? Today was such a crazy, run-around day for us. For starters, my son Elliott had a 9AM appointment at Shriner's Hospital, which meant that I had to drop Chaz and Dominic off at school at their usual time of 8:45 and then book it back across town with only 15 minutes to spare. And let me tell you, it was FOGGY this morning. Up by my kids school, it was thick as pea soup! I know that's so cliche' but I don't know how else to describe it. Basically you couldn't even see the traffic lights until you were practically under them. Craziness.

But our appointment went well. For those of you who don't know, Elliott was born with club feet, one mild and one severe. From the time he was three days old until he was three years old he had casts, splints, braces, and physical therapy to endure on a daily basis. But he's such a trooper. He never let any of that stand in his way. When Elliott was three, we moved back to the States from Germany and he was able to have surgery at Shriner's Hospital. I cannot say enough good things about the Shriners. Those people are miracle workers! And they're all such wonderful, caring people besides. Thanks to them, Elliott is now able to walk, run, skip, and hop with the best of 'em. And they were so pleased with his progress today that we don't have to go back for another two years! Praise God for that.

The one dim spot in our day was when I realized that it was 11:00 and that we were still no where near done (they'd just ordered X-rays) and that I was not going to make it back to the school in time to pick up Dominic from preschool. But after a frantic couple of phone calls, my dad was able to go get him and let him ride around with him while he worked until Elliott and I finished up. Thank God for Dads! I've been blessed with a wonderful one who has come to my rescue more times than I can remember.

We were done around 12:30, so my dad suggested we meet up at this little diner I had never been to. It was a real, old-fashioned diner like the kind you see in the movies. The owners were there and served up some really delicious home-cooked food. I had a BLT and a bowl of seafood bisque that was amazing! Yum. It makes my stomach growl just thinking about it.

After that we made a quick stop at home, then it was back up to the school to pick up Chaztin and put up his bullitin board display for student of the week. Then a quick stop at the grocery store (Yay for in-store kid care!) and then home again. We had lots of homework to get done tonight, plus extra make-up work for Elliott since he missed school today, then dinner, bedtime, and my husband had a late-night soccer game to get to.

So yeah, I'm sorry to report that I did not get a chance to get crafty today, unless you count the elaborately detailed fire truck scene that Elliott and I drew together while waiting for the doctors this morning. Which I think counts, by the way, but my camera battery died so I don't have pictures to share. Besides, I think it might have gotten a little chocolate milk on it from when Elliott brought it into the diner to show his grandpa.

But not to leave you completely hanging, I did find this blog candy giveaway over at the Crafty Little Pigtails blog. http://craftylittlepigtails.blogspot.com/2010/03/ready-for-some-blog-candeeeeeeeeee.html. You'll definitely want to head on over there and check out all the details and sign up for this great package! 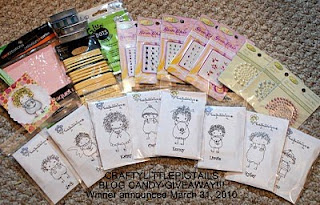 And that's the tale of my Monday! Here's hoping Tuesday will be a little less hectic for all of us. ;o)
Posted by Christiana at 11:05 PM