The weekend is officially here! As I mentioned, my kids had off school today, and thankfully it was sunny and warm enough with a light jacket for them to play outside. And can I just say that I am already sick of the sound of the slamming screen door? Lol. I guess Spring is officially here.

I had planned on getting some writing done this afternoon, but it was impossible to concentrate with the kids constantly coming in and out. I was beginning to think I should take a tip from one of those mothers you see in old movies who chase their children back outdoors with a broom. Rather than resort to pleads and threats, I gave up on trying to write during daylight hours and decided to do some baking instead. The kitchen is in the back of the house and we have a privacy fenced in yard, so I could keep a good eye on them while bustling about with my mixing bowl. Plus, I'd have something yummy to surprise my hubby with when he got home. That's always a good thing.

Unfortunately, I realized just in time that I was out of eggs, due to my craving for an egg salad sandwich for lunch. I remembered that I had a recipe for Raspberry Coconut Bars Squares that I'd been meaning to try, and bought all the ingredients for, and then never made. Since it doesn't call for any eggs, that's what I decided to make. 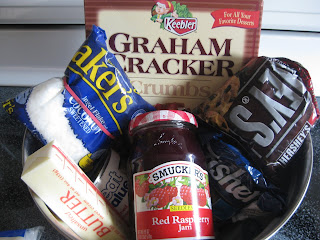 Directions:
In a pan, melt butter. Add graham cracker crumbs, mix with a fork to combine. Press into a greased 9X13 baking dish.
In a bowl, add coconut and condensed milk. Toss with 2 forks or salad tongs to mix thoroughly. Plop by spoonfuls over the graham cracker crust, press down to cover. This can be quite sticky, so I sprinkled a little extra dry flaked coconut over top, then pressed it all down with my hands. The mixture is wet enough that the dry coconut will stick to it, but not so much to your hands.
Bake at 350 F for 20-25 minutes until lightly browned. Cool completely on a wire rack.
Stir raspberry preserves with a spoon in the jar until it's good and runny. Drizzle over coconut, smear with the back of the spoon or a rubber spatula to cover completely.
In a dry frying pan, pour pecans (walnuts could be substituted if that's what you have on hand) and toast over medium high heat until they begin to smell warm and nutty. Remove from heat immediately and sprinkle over preserves.
Pour chocolate chips in a bowl and melt for 30 seconds at a time on 50% power, stirring after each time, until they are lump-free and gooey delicious. Drizzle over top of dessert. 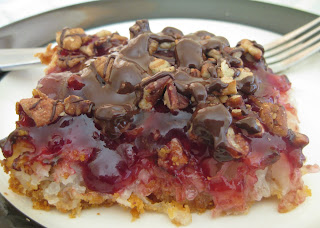 Now, if you can wait until the chocolate cools and hardens, you are a much stronger woman than I. If you give in, as I did, do check your face on the side of the toaster before you serve your family or guests. I had telltale traces of melted chocolate all over my bottom lip, which resulted in me having to dole out a slice to each of my boys before dinner, or endure the humiliation of being labeled as a mom who doesn't practice what she preaches.

And I've got the unfinished dinner plates to prove it. Oh well, sometimes you've just got to live a little, you know? And let the people in your life live a little with you. I can't think of a better parenting practice than that.

Have a great weekend, everybody!
Posted by Christiana at 6:03 PM